Ducati and I were getting on well.  He was much calmer.  I needed to go slowly with this next step – for both of us.

I first led him to the mounting block – and reinforced him.  Then we walked away.  I continued like this for a few rounds – then I stepped on the first step.  He stopped and I reinforced him.  We repeated several times – and then that was enough for the session.

I continued this way – the hardest part was teaching him that I wanted to click for his back lined up at the mounting block – not his head.  Alexandra Kurland has a DVD – Capture the Saddle which is worth watching.  I wasn’t capturing a saddle – I was capturing Ducati’s back.  At that stage I had no equipment on him.  Cindy Martin – my coach – had suggested I ‘dress’ him for these sessions – to get him used to wearing gear for riding.  I didn’t – and the reason I didn’t was that it seemed like too much trouble to carry the saddle backwards and forwards from the house to the shed.  I keep my saddle in the house so it doesn’t get chewed by rats.

In hindsight – I should have heeded her advice!

I continued practising this – with the mounting block near the wall of the arena – then I moved it to the cone circle.  I thought this would be a better way of getting Ducati properly lined up – and help him understand what I wanted.

We repeated many rounds of this – and the moment he ‘got it’ was wonderful.  As we came closer to the mounting block he nickered, started trotting and stopped near it.  I caught it on video – here it is – with music added!

During this process, I noticed my anxiety had decreased as well.  Before that I was feeling anxious as I moved to the second step.  But now   I had stopped pairing the mounting block with my thought of ‘this is a one way path to getting on the horse and you may fall off’.  It was just another game in the circle.

I eventually moved the mounting block back near the corner and we played with it there as well.  I noticed some anxiety with it there.  I spent lots of time just stroking his back – then I would move away – we would do something else then head back to it.  Over time he got used to it there.

Here are photos of various exercises.  I would sometimes get him to follow the target stick, trot, practise a more collected walk – and the mat exercises 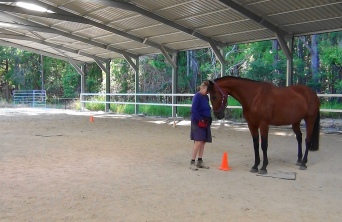 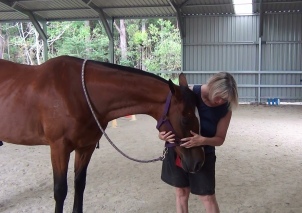 We went through a phase where he didn’t want to trot – that was fine – we did something else.  Then one day he offered a trot again when he saw the mounting block in the circle – he was delighted!  I just worked on things he was happy about – and left the others while I went off to think about why he didn’t like something.

Sometimes we just had a break from the arena.  I would go a few days and then take him back in.  I was also working with Magnum throughout this time…

So before I continue with Ducati’s training story, I will tell you about Magnum.

COMING UP – MAGNUM – THE TEACHER’S PET!