Back to Ducati.  So we had been doing all the exercises again – with much less anxiety – doing more repetitive behaviours with lots of ‘head lowering’.

I had reintroduced the reins and he was much happier as I had learnt to let go!!!  Now I wanted to start taking him to the mounting block with the bitless bridle on. My aim was to first lead him to the mounting block, then touch his back – gradually putting more pressure on it.  I would then start leaning on him and putting my leg over his back which would lead to me sitting on him – reinforcing – and then getting off.

Here is an early trip to the mounting block!

We made many trips to the mounting block.  I climbed the steps and stroked his back.  I leant on him and also started to lift my leg over his back.  We would spend some time there, then walk away and do something else.  He was happy with the routine.

I also brought Saadi and Danny into the arena on some days – and I even had Magnum walking to the mounting block.  I was never going to get on him – it was another game to see how he was feeling with me up there.  As it turns out he was great!

I also took Danny to the mounting block.  He hadn’t been ridden for many years.  We just played the game with me stroking his back.

Saadi and I practised the rope handling.  The plan was to start bringing him into the arena more as the weather cooled off and he wasn’t so bothered by itch.  As it was – I had my hands full with the other three!

Here are some photos. 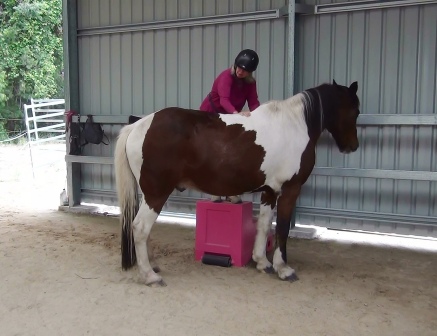 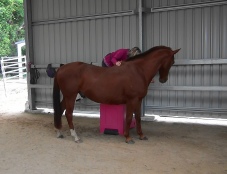 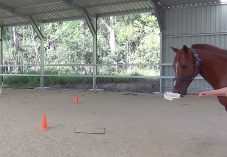 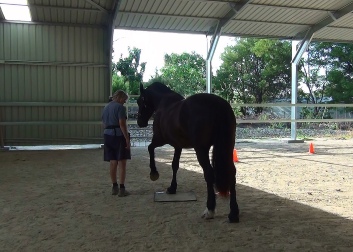 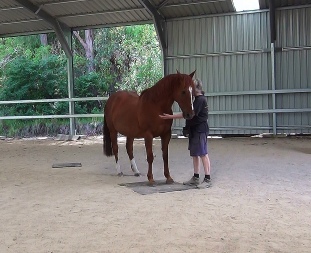 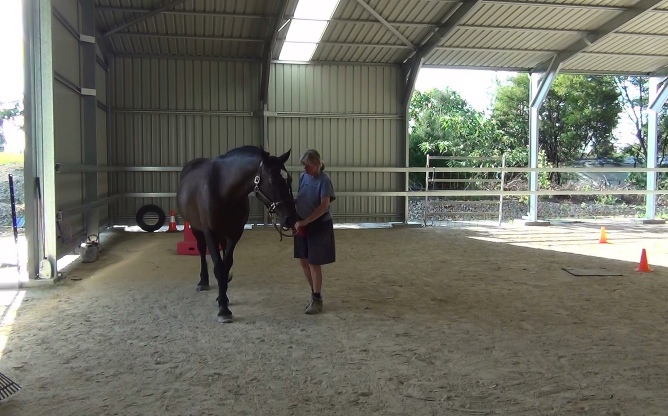 It was the end of March.  I had a few other commitments on at the time – but I would spend time with each horse.

Doug and I had talked about me getting on Ducati.  I promised when I felt ready, that I would make sure he was there.  I had noticed I was growing in confidence.  My fear was melting away.  All the thin slicing of this process had helped so much.  To get to the mounting block, then know that I didn’t have to get on, was a great boost.

My next step would be to introduce the saddle.  I’d had a saddle fitted for him the year previously.  I’d had it on him – but not on a regular basis.

I continued this process throughout April.  Sometimes Ducati’s back looked so inviting.  My leg would go over – or I would partially lean on him.  It felt wonderful.  It was no longer scary.

I had been working on this moment for four to five months.  I could feel the time was drawing closer.  Ducati seemed happy and was very used to the whole routine of what we would do at the mounting block.  He was wearing his bitless bridle and reins.  I was excited at the progress we had made!

Soon I was going to ride a horse again!