Mary Hunter gave a great presentation on Errorless Learning.  I’m not going to repeat all that was said – but I will give a brief outline and then add my own thoughts on this topic.

Mary started with this quote:

Yes – we always talk about trial and error and how you learn from your mistakes – that learning is a gradual process….

It’s gradual because of errors made – so do errors really matter?  Is there really a problem?  Well…

Mary went on to talk about the subject of mathematics (my most feared subject).  It can fall apart in the early years and negative emotions can persist even if you finally master it.

Ohh!  Now I was understanding!  I was going okay at maths…. until I was 7 or 8…. and enter Mrs Davies…  She was the sort of teacher who would be stood down these days – but this was the 60’s!  Whatever knowledge of maths I had up to then went out the window, because she put the fear of God into me!  If I got a wrong answer – if I didn’t write my numbers neatly – I was hauled out of my seat and belted and belted.  She would spend the day teaching maths – and belting kids – I didn’t learn anything – I shook.

But of course, this was extreme – what about just making a mistake and then having it explained – well it seems processing errors is disruptive.

Mary went on to explain some of the research on errors during learning. When pigeons and other animals learn by trial and error and make many errors during learning, this often produces negative emotional behavior. Then, when no reinforcement is given, the pigeon may stomp his feet, flap his wings, and engage in other behaviors that we would label as frustrated or unhappy. Many trainers distinguish between R+ and R- as producing good emotions (R+) and producing negative emotions (R-). But, R+ doesn’t always get you out of emotionality – all the emotions from mistakes are still there.

Ohh – of course!!!  Teaching an animal with R+ doesn’t necessarily mean all is perfect!  There is so much to take into consideration!  A good shaping plan is necessary.  So often we rush into training without taking other steps into consideration.  We focus on the goal behaviour – rather than all the steps needed to get there.

Our ideas about learning in general need to change – with the right teaching, a seemingly difficult subject can be made easy.

Apart from errors leading to  emotional responding, incorrect responses may become part of the learner’s repertoire – and learning is much more gradual.

So – what is errorless learning?  Here is one of Mary’s slides:

How do we improve our training? We need to think about what we are teaching – does the learner have prerequisite skills – what is meant by this?  Here is another slide: 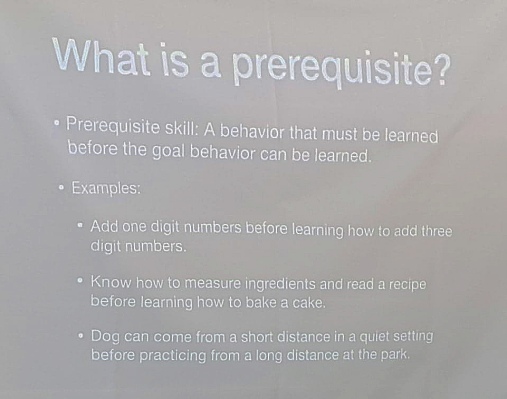 Then – what starting point will allow the learner to be successful?  It is always something that the learner can already do.

So – how do I start improving his body?  Do I run him around and around?  Do I send him over poles?  What will I actually be doing?  I have been inspired by Anja Beran’s work with horses and she regularly says that lateral movements build collection and stop horses falling forward.  How would I do this?  What did I need to consider  before I even started taking him into the arena?

Well the first consideration was his comfort – and Danny has always had hoof troubles – despite a pasture analysis and correct minerals added to his diet – and despite regular trimming.  His heels have always been underrun with thin soles.   I needed him to be comfortable before I even thought about doing more training with him.  I have had him in boots for most of the year – to give protection and to help his hoof problems.  And his hooves are changing!

While I was waiting to see if the boots made a difference, we did some ‘standing still’ work on the mat.  I did some microshaping to get him rocking back to the hind legs  – and generally spent a lot of time tending to his hooves.  I had also previously introduced the halter and lead rope – and he had spent time in the arena walking around the cone circle and standing on the mats.

When he was finally comfortable to move –  the mat was our starting point in the arena – and ticked the prerequisite box!   I then casually walked him around the cone circle  – stopping at various mats.  I  used some of Alexandra Kurland’s rope handling to gently bring the head/neck to the left – just the smallest move.  That was it.

The next day, the session was a bit longer with a little bit more rope handling – and so it has continued .  Here is a short video from Week 1.

I’ve drifted away from Mary’s presentation – but I hope that is an example of a prerequisite skill – and a starting point – or at least an idea of how a big goal needs to be broken right down.

Mary also referred to a well known video – the pigeon, box and banana.   Here it is:

The pigeon was first taught how to push the box.  This slide shows the prerequisite skills that were needed for the pigeon to solve the problem. 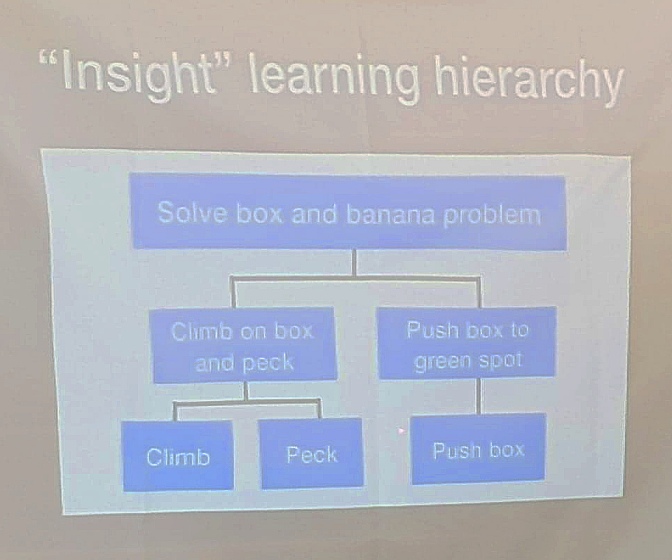 I loved how Mary’s talk was getting me to think more deeply about all these things.  There was much more to this talk – and I am sure Mary will expand on this subject in the future.

I think many of us are of the mindset that learning needs to be a struggle – but what if learning could just glide from one thing to the next?  That’s how it should be – then we could learn even more, gain confidence and become proficient in whatever it is that we are learning – humans and animals!

But it was one final sentence that resonated with me.  Mary said “When there is no fear and pain – learning can happen”.  Yes!  Magnum is a perfect example of that!

Let’s all spend more time setting up our learner for success!