I’d made a mess of Danny’s early days.  Now it was time to repair the damage.

The rain scald started to heal.  I learnt to brush ever so gently – or not at all!  I had the farrier visit.  Marcus had been my farrier since our early horse days with Quill.  He had done an excellent job with him –  and Quill’s hooves improved so much over the time we had him.  He had also been trimming Ducati’s hooves – and now Danny had his first trim with Marcus.  Magnum of course always stayed a safe distance away.

Danny’s hooves were full of seedy toe – an infection in the hoof –  and the hooves in general were in poor health.  They started to improve after a few trims.  Danny always struggled with the trimming – and Marcus was always very patient.  Despite the difficulty Danny had with hoof trimming, all the horses liked to hang around Marcus – even Magnum didn’t run away completely.  How I wished that one day he would be able to do Magnum’s hooves.

Next was dental care!  Oliver runs EVDS and has a passion for horses – and in particular dentistry!  He designed a great portable crush for his mobile dentistry work and works long hours travelling throughout the district.  He was able to confirm that Danny was indeed only five – and on a positive note – had a great mouth!!!

Now Danny had had his physical needs looked after, I wondered how to address his emotional needs.  He was certainly improving.  He was more content – much happier to come to me and enjoying the contact.  But there were things I was noticing – he wasn’t ‘in sync’.  I would observe him in the paddock – Magnum and Ducati would turn one way to graze – and then another – following each others patterns.  Danny never did that – and he often wasn’t aware of his surroundings.  The other two would be up waiting for their feed – and Danny would still be in the bottom paddock – or he would suddenly realise he was alone and start running and calling.  It was lucky he didn’t live in the wild!

I took both Danny and Ducati to a clinic given by Mel Fleming – once again at beautiful Orara Valley House.  The horses appeared to enjoy their time there.  I rode Danny – and two friends shared Ducati for the sessions.  Ducati was the perfect horse.  He did everything that was asked of him.  Danny was all over the place.  I was riding him in a rope halter but it was impossible for him to register what I wanted him to do.  Still, it was great to be out riding! 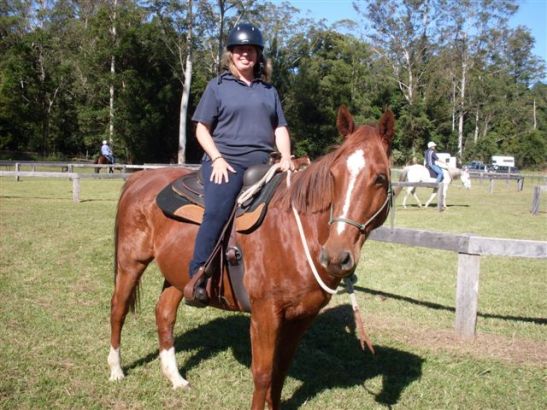 However, I watched the ease at which the two friends rode Ducati.  He was trialling a Balance Saddle which Mel also fits and sells.  It certainly was agreeing with him.  I was struggling with Danny who seemed oblivious to me being on his back.

Over the winter months I rugged Ducati – and I also rugged Danny for a couple of winters – not because he was cold – but because he seemed to like that attention.  The process of being rugged obviously appealed to him.  Maybe it was a little bit of extra ‘mothering’.  I wanted him to feel special.  I was still making it up to him for the early days.

I had still been feeding and tending to them at the top of the hill near our house.  That was about to change!!

COMING UP –  THERE’S SOMETHING ABOUT DANNY!

IF YOU ARE NEW TO THIS STORY, PLEASE START HERE AT THE BEGINNING – Part 1 – An Introduction