My ponderings about my journey were about to come to an abrupt halt.  I had been away for just over two weeks – it was almost mid November 2014 when I arrived home.  While I was away I was slightly concerned – Doug hadn’t had much contact with me.  I put it down to him taking on a new job.  When I asked about the horses he said they were fine.

I rang him when I arrived in Sydney – while waiting for my flight home.  It was then he told me the news. He said he didn’t want to spoil my trip so had held off telling me.  Ducati had badly sliced his leg – almost cutting off part of his foot.  He had missed a major artery fortunately.  Otherwise he wouldn’t have survived.

All this happened on the very day I had left for US.  I had closed the gate to the new stable area.  I hadn’t thought about them all assembling in the small space – and I hadn’t thought about an altercation between Ducati and Saadi.  Ducati’s leg went under the newly constructed corrugated iron – he obviously pulled it out and in doing so cut the heel and coronet band.  He stood there with blood pouring out until Doug noticed he wasn’t with the others.

The vet was called immediately and Ducati was started on a course of antibiotics and painkillers.  Then it was up to Doug to treat the leg.  It needed to be hosed and have a wound healer applied. He had to set up a makeshift area so he could tend to him without the others around.  The paddock to the stable area was closed off for safety.

I felt terrible for so many reasons when I heard the news.  I felt so much guilt!!!  Doug was absolutely traumatised by the scene that had confronted him that day – he had wondered how Ducati was still alive after the amount of blood he saw on the ground – and the hoof was such a horrible mess – he thought the vet would put him down.

Then it was so difficult to treat him.  Doug is uneasy around horses.  He said it was probably fortunate it was Ducati – and not one of the others.  Ducati is such a gentleman – he ate hay while Doug tended to his leg.

When I arrived home I went to see the damage – the heel bulb sliced apart and the cut going all the way down into the hoof.  Here is a photo of it – 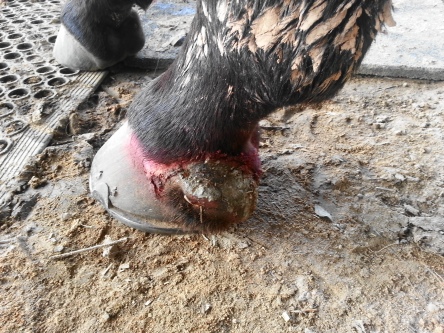 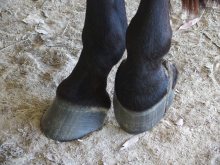 The first photo was taken about 8 weeks after the initial injury – he had a remedial shoe on the vet’s advice,  TuffRock on the leg for swelling and an assortment of wound healing potions for the heel bulb.  I hosed it twice a day and provided extra TLC.  The other two photos were taken in 2016.

He can still race around so fortunately it hasn’t stopped him from enjoying himself.

It did consume a lot of time – and in December 2014  I went out in sympathy – and also had a foot I couldn’t walk on! 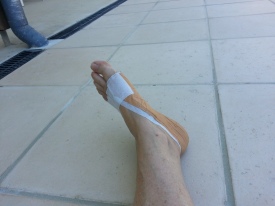 Strange how these things happen!!  It was like a bursitis in my foot – required lots of rest – and eventually orthotics.

Our Xmas was the first one without ‘Nanna’ – a lot had happened in the year.  I was exhausted.  Then after New Year, instead of jumping with enthusiasm with my new found knowledge and lovely area for the horses – I fell flat.  An ‘old friend’ returned – one I thought I would never see again….

COMING UP – FALLING DOWN…..