Continuing on from the fall from Ducati in April 2017…..

Ducati came back over to sniff me and to eat the treats that had spilled out.  I just hoped that he wouldn’t stand on me!

I finally managed to sit up.  So much pain and shock – but mainly I was just upset.  Upset that it could go so wrong.  I scanned my body – could I stand?  No.  My left arm wasn’t working as it should.  I thought I’d pulled a muscle.  I’d obviously hurt my legs, torn muscles in my groin area and hurt my back.

I managed to slide along the ground to the mounting block – it was a slow process.  I thought I could use it to help me stand up.  I should have been calling out to Doug – but I didn’t seem to have a voice – and he was probably way out of earshot.  I tried to stand up – but I couldn’t.  I couldn’t push on my arm and my legs wouldn’t hold me.

I sat there – leaning against the side of the arena – moaning.  I cursed myself for not bringing my phone.  Ducati kept coming across – it would have been nice to say he was checking on me – but I think he was just looking for more treats.  As he put his head down to sniff me, I managed to unclip the reins with my one working arm.  I didn’t want him having an accident as well.

After a while, I thought I just HAD to get up – I decided that my arm would just have to work!!!  With a lot of struggle I finally managed to stand – on very shaky legs.  I hung onto the wall for a bit, then slowly started to walk to the gate.  Ducati followed me.  Just as I was coming out, Doug appeared.  He started to say “Oh were you having a really long session” then realised something was wrong.  I asked  him if he could take off Ducati’s halter.  He then helped me on the very slow walk to the house.

I knew what his first words would be “Why did you get on on your own?”  “Why didn’t you tell me?” etc.  I told him I was just overcome – his back was so inviting.  He asked me if I needed to go to the hospital.  I said no – I just needed painkillers.  I sat down in the lounge chair and rang Emma, who was at work.  Being the nurse, I had to describe what was wrong.  I said all was fine – my left arm wasn’t working well – I had to lift it with my other hand – but I was sure I was fine.

I told Doug I needed to go to bed.  He helped me get in.  Emma rang again to see how I was.  She asked more about my arm – she wasn’t convinced and said she was coming to examine me.  I took panadeine and tried to sleep – but woke with a bad reaction to it.  Now I felt like I was going to give birth to an alien – as well as hurting in every other part of my body.  I also felt nauseous.

Emma arrived – took one look at my arm – told me it was broken – and I needed to go to hospital.  I told her if I sat up I would throw up – and I was too sick to move – so I was staying there.  She shoved anti nausea tablets into my mouth – they got the office chair – Doug helped me onto it – and then wheeled me on it out of the house to the car.  It must have been quite a sight!!!

A wheelchair was found at the hospital – and I spent the night there.  After x rays it was confirmed –  the left humerus was broken – it wasn’t very humorous! 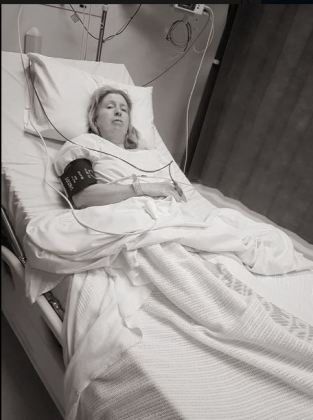 When you mention a horse riding accident, they give you every scan possible.  I had so many x rays, cat scans etc.!!  In the morning I was sent home with medication and instructions to return the following week for another x ray.  I have only praise for our healthcare system – they all work so incredibly hard.

Now it was time to head home and try to pick up the pieces.

COMING UP –  LIVING IN PAIN