Horace – as you can see – is a wooden horse!  He is the same height as an average horse and approximately the same width.  So why do I have him?

It was April 2017  – and after the fall, my fear of mounting a horse went through the roof!  For the rest of the year I didn’t even want to think about it.  At the beginning of 2018 I had another accident – but horses were nowhere near!  I fell over grocery bags and broke my wrist!!!  I was determined to have no more accidents after that!

I thought I would be content playing with my horses on the ground after the accident,  but it was hard to ignore the longing.  I wanted to sit on a horse again.  That feeling is heaven.  Sometimes I was in tears as it was all I wanted to do.  I felt selfish.  Here I was wanting to sit on a horse – did any horse want me to sit on it?  Why would it?  I was overweight after my accident and  I had lost so much muscle tone. I was lopsided.  It would be impossible to even get on a horse!

I would see photos via Facebook of some of the girls I knew having fun riding with their local club.  Each time it filled me with pain.  I had decided in my mind I wasn’t physically or mentally capable of even getting on a horse any more.  In my mind, I had run straight into a brick wall.

One day when it was all too much I burst into tears.  I had a long talk to Doug about it.  It’s good that he understands what it’s like to have a passion.  He asked me what would help me to get back in the saddle again.  So I thought about the steps needed.  I told him I needed something that is the height of a horse so I can practise getting on and off –  He said he could probably make something for me.  I was so excited!!!

I searched the internet for plans of wooden horses and found many connected with polo.  So I saved those pages, Doug bought the ply board……….. and then it sat for a year or so……..

Meanwhile, 2019 was a busy year.  There were trips away – and our daughter’s wedding!  Now that gave me extra incentive!  Having a wooden horse was only part of the solution!  I had already decided that 2019 was the year for me to lose some more weight.  I was too heavy to ride a horse and I would struggle to squeeze into a nice dress for the wedding.  The ice cream and chocolate addiction had to stop – I went cold turkey and didn’t look back.  Kilos dropped off and I felt better.

I headed overseas  in July 2019 and met up again with Rebekka Schulze while we visited Anja Beran in Germany and then attended Science Camp in Italy.  I had been in contact with Rebekka over the previous year and had become interested in the Classical Pilates she teaches.  While I was over there she gave me some lessons.  I couldn’t believe the changes in my body –  I found muscles that I wasn’t even aware of.  I felt so good!

When I returned home I continued lessons with Rebekka via Skype and gained a newfound confidence in my body.  Everything started to feel easier – and in general I felt more confident.  I also had been using a foot stool to practise stepping up.  I wanted to feel what muscles I needed to use when I would be putting my foot in the stirrup.

Meanwhile, I had been in contact with friend Vicki and she had kindly offered for me to sit on one of her horses, Monty.  Now this was such a wonderful gift!  So we arranged a day – and as a bonus,  friend Cheryl was there – I couldn’t have asked for two more supportive people!  There was no pressure for me to actually get on.  It was entirely up to me – and Monty of course.

I wasn’t going to rush anything.  I stood on the mounting block  and monitored how I was feeling.  My heart started to race.  I hopped down and walked around – then went back for another try.  This was repeated several times and I  progressed to having my foot in the stirrup.  I realised that my main concern was whether my body would let me down.  Had I done enough preparation?  Was my body strong enough?  Would my left hip behave itself?

I had certainly prepared – and Rebekka had taught me well.  I engaged my core and used the muscles I had discovered to take the pressure off the hip.  Suddenly I was swinging over the saddle and sat down without too much of a thud.  I think Vicki and Cheryl were surprised.  I surprised myself…  there were tears all round!!!!!

I sat there – with the tears welling up – just feeling Monty’s body under me – feeling that horsey feel – his breathing – the fur – everything…..  and I just sat…..  to sit on a horse, for me, is such a spiritual moment.  There is a feeling of long ago…. of past lives…. of childhood…..  of healing….. I cannot thank horses enough for what they have given me.  And I realised this is why I have had that longing – why I just couldn’t put it aside…..

And I rejoiced in the knowing that my body didn’t let me down.  I was able to dismount and mount again.  Then we took a few steps – we walked for a minute or so – and that was enough….  I had done it.  And as I write this, once again I have tears welling up…. thankyou Vicki and Monty! 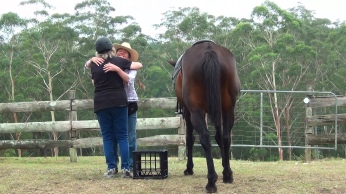 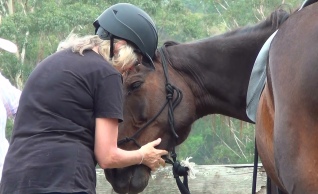 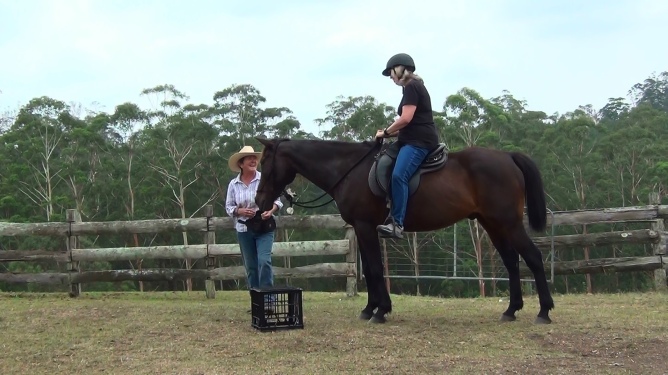 So – back to Horace.  Doug finally finished him for Xmas this year and named him Horace.  It’s the most exciting Xmas present I’ve ever had!  And what am I doing with him?

Well Horace is standing quietly – with an old saddle on him – so I can practise mounting and dismounting.  He also allows me to get used to being up at that height.    So far I have spent time just feeling what my body is doing as I sit in the saddle.  Soon I will do some work with the reins.  But for now my focus is about the mounting and dismounting – how can I make it better?  What can I change?  I’m sure I will become more creative with him as time goes on.  Here are some photos – the horses have enjoyed meeting Horace. 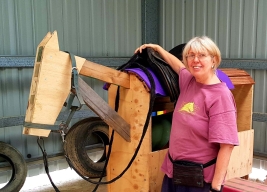 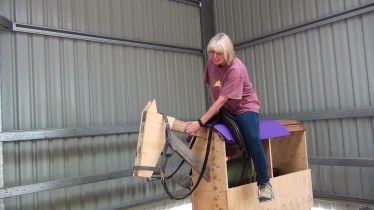 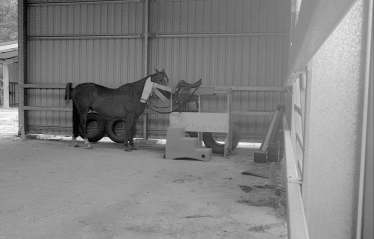 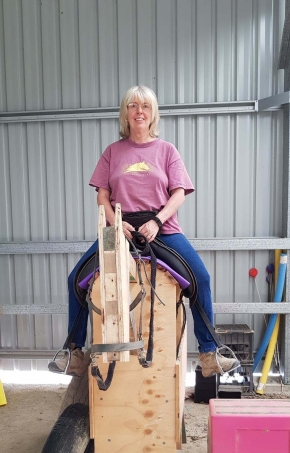 So I will keep you updated about what Horace and I get up to.  Today was a surprise…. a giant spider came out from under the saddle – I’m glad I was only standing next to him – I may have panicked and fallen off – and it would be embarrassing falling off a wooden horse!!

Finally, I like to think of these steps in relation to errorless learning – which I posted about recently here  14. Science Camp – Errorless Learning by Mary Hunter

I think of Horace as a way to gain  prerequisite skills needed for riding.  He is helping to set me up for success.  The Pilates and weight loss have also helped.  Let’s see where it all leads….