Danny had settled in – but he was still struggling…. We tried shoes on his front feet to help him.  The soles were very thin.  I could also see that ‘something’ wasn’t right with the hind end.  But I was mainly worried about the ‘vagueness’.  He was in another world – and I didn’t know how to reach him.

He wasn’t shod for long as he really struggled with the nailing on of the shoes.  It would be best to use boots.  But apart from that – he was an ‘odd bod’.  He would be so vague – then he could get fiery at times – and other times I think he was hurting physically.  I was reluctant to ride him – was I hurting him?  I had some bodywork done – but it didn’t seem to make a difference.  It was like he didn’t realise his hind legs were attached to him.  He seemed to have no awareness of his body!

However, I now had three horses! And finally I  had some accommodation for them.  Doug had built a stable area – two stables with a garage for storage of feed.  Wow!!!  Now I could move everything off the verandah!!!

The horses had to go around the back of our house to get to the new area – so they now had something similar to a ‘track system’.  They already had a hill to walk up each day – now they would walk through a narrow, forested area to get to their feed spot.  With three of them, Danny and Ducati had the stables – and of course Magnum stayed much further away.  It was a much safer arrangement – and they were all separated, so none could pinch the other’s feed!  It also joined up with the ‘small paddock’ so I could keep them in there if I needed to.

Things were looking up!  It was wonderful!  I didn’t have to fear being trampled.  I could safely rug Ducati and Danny.  The area was protected from the south and the stables provided a little bit of shelter. 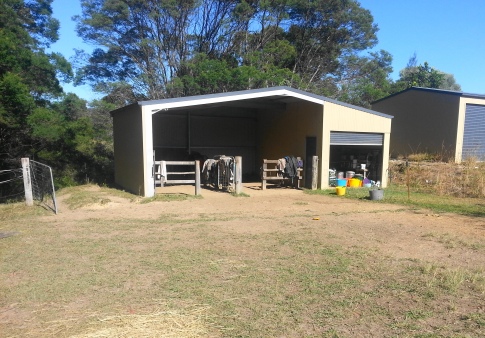 The only downside was that if it rained,  the area at the front turned to mud – but in all it was a wonderful improvement.

So….Danny, my smaller, quieter horse – who ticked all the boxes – wasn’t turning out quite as planned.  I still struggled with my feelings for him.  I made sure he was okay – I tended to him – I did everything a ‘mother’ should do – but I wasn’t feeling it.  Could you have an autistic horse???  I didn’t know…  Maybe his brain was scrambled because of his terrible start in life.

All I knew was that I couldn’t keep trying to ride him like that.  Apart from it not being fun – it wasn’t right.

COMING UP – FALLING IN LOVE..

IF YOU ARE NEW TO MY STORY, PLEASE START HERE AT THE BEGINNING Part 1 – An Introduction