Well, there are only twelve hooves in the feature photo – but you get the idea!!

By about March 2016, I decided to trim all four horses.  Previously I had had my long time farrier who had sadly left the district.  I had to search for another farrier.  I did find someone – but it wasn’t the same so I decided to do it myself.

It was a lot to take on – but my confidence was at an all time high!  I went through the same process with Saadi, Ducati and Danny.  They couldn’t believe their luck that they were now included in the whole hoof trimming process.  They had certainly watched their fair share of it when I was trimming Magnum.

Ducati was a dream – ever so willing and excited.  He has good hooves – apart from the one damaged in the accident.  I couldn’t help but shake my head when I thought about the stark contrast  from when the new farrier visited.  He had struggled with all three horses.  Ducati could hardly get his hooves up quick enough now I was trimming him with positive reinforcement!

As I took the Hoofjack to the next horse – they would all start nickering “My turn!!!”.  Danny and Saadi were more difficult.  Danny struggled with keeping his hoof on the stand – he struggled to balance.  And Saadi was a little overwhelmed.  It took many stops and starts – and being a Percheron – his hooves are huge!!!

I also had them back in the arena.  Magnum kept walking around the cone circle and gradually found better balance, particularly with nice short hooves!

We also played ‘The Saddle Game’.  I had an old cheap saddle and I thought it would be something different to put it on his back.  I didn’t intend to ride him – I just saw it as another exercise in confidence. 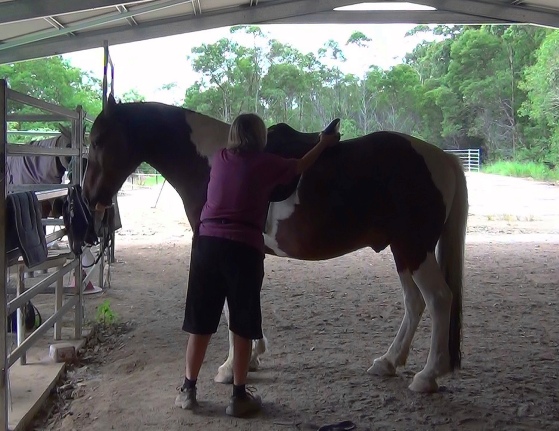 Things were pretty good –  the horses were happy,  Magnum was going from strength to strength, and I had a new skip in my step….  but I was still so very tired.  I was too scared to meditate any more in case I went to sleep for several hours!!!

Maybe I was still processing.  I was still seeing the psychologist, Karen.  If you read Part 107 – Falling Down… you will read about when I first started to see Karen in 2015.  By March/April 2016 we had covered a lot.  The issues from the past – and my lack of boundaries with people had now spread to dealing with some friends and acquaintances I had in the present.

I had a long time friend who could be great – but she was quick tempered and   I would often be on the receiving end of  verbal abuse – I would say sorry for whatever the problem was – and then all would be okay.  But I noticed the cycle of abuse had increased – and I knew things needed to change.  I wasn’t sure what to do.

Karen – and circumstances –  were about to help me…

COMING UP –  THE POWER OF MEMORIES