Before I went on my trip, I’d had a feeling that a ‘grey horse’ wanted to ‘talk’ to me.    If you haven’t already read about my animal communication – head back to this post  Part 9 – Breakdown, Enlightenment – and Memories from the Past …… and Part 10 – Can Horses Talk?

When I arrived at Anja’s, of course there are so many grey/white horses!  Would I find which one it was?

It’s sometimes difficult trying to communicate with a horse in an environment that doesn’t feel open.  Anja’s is a beautiful, calm place – and I have no idea if she is open to animal communication – but the whole purpose of everyone being there was of course to see Anja’s work and the physical and mental miracles she has performed.  I had limited time periods to ‘talk’ with this horse.

I rounded a corner in the grounds – and there was this horse standing there  – was it him?  He certainly looked like he was ‘waiting’ – but maybe he waits there every day!!!

I went and said hello – he seemed like a nice natured horse.  But then I continued wandering…

Each morning and lunchtime I went to have a chat with him.  When I say ‘chat’ – usually I wait until I ‘hear’ or ‘see’ something.  And at some stage he said to me “Am I staying here?”  Ohhh – it’s a question I have had from so many horses……  Of course I couldn’t tell him at that time – but I told him I would find out for him.

Each day I spent time with him – sometimes horses act as a ‘channel’ to bring people to you.  I have this with my own horses quite often.  He said to me ‘Your mother is here – and your father too.  They are happy for you to be enjoying horses’.  It was so nice to hear.

I said to him ‘I feel like I’ve made peace with my mother at last’.   It had been four and a half years since she had died – and in that time I had worked through many different feelings – the grieving process sometimes takes a strange shape.

My mother was a very insecure person, and had had some sad events in her life,  and I had really felt like I started mothering her the day my father died – when I was 11.  Sadly, my sisters and I had had several sayings drummed into us… some being ‘What would you know!”  ‘Problems!  You wouldn’t know what problems were!’… and another  “Our family always has bad luck”  Now, I don’t think these types of phrases were said with venom – it was more a habit and the general mindset of Mum – that life was hard, scary, we weren’t as good or as lucky as other people – but when you have heard it your whole life, it’s hard work to break the cycle.

Now, I had some intensive counselling around 2000 for my issues from the past – it was an eye opener and life changing – and is probably worthy of a book in itself !  I also had some more after my mother died – this time it was more complex – I had great awareness of the issues – but how the psychologist put it “Your mother’s dead – but she’s still in your head…”  Of course! How do I ‘behave’ now I don’t have to behave how my mother taught me?   I went through a lot of anger – and finally I felt I had come to terms with it.

So at that moment – I felt a sense of peace.  My parents had done the best they could with what they had.  It was nice to have that feeling standing there, with this beautiful horse in a beautiful setting.  I thank him for that.

Back to the story – I’ve rambled again…

I knew I needed to approach Anja – finally I had a chance to ask her if the horse in the end yard was staying at her place.  She said ‘Yes – he will be staying around here. ”  I said to her that he seemed like such a nice horse.  She said – “Yes he is.  He has a lot of problems and came from Spain where he wasn’t treated well”.  Now that’s how I remember the answer in my head – but the details may be different.  Well… no wonder he wanted to know if he was staying!  He also had memories from the past and he didn’t want to go back to those conditions.

I was so excited to be able to tell him that.  I went over and said to him ‘You’re going to be okay.  You’re staying.’  He let out a big sigh and dropped his head lower – relief!!.

We had helped each other – in those quiet moments – and I still didn’t know his name!  As we hung out, I decided to try some ‘clicker moves’.  I had no treats – but I could praise him.  I put my hand out as a target – he stepped forward – click, praise – then I used my arm and body as a cue to take a step back – one step – click, praise.  We continued doing this gentle move – target forward – take a step back.  He could have walked away – but he stayed.  And as we were doing this a  calmness descended upon him.  He ‘dropped’ and relaxed…  I was so excited to be doing this little move!  No treats – but the gentle movement and praise were rewarding. 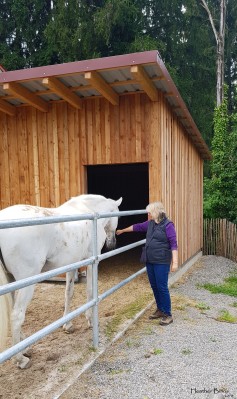 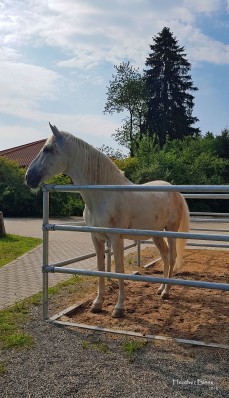 Before I left, I found out his name – Quilate!

So to Quilate – I really enjoyed our time together and the help we gave each other! 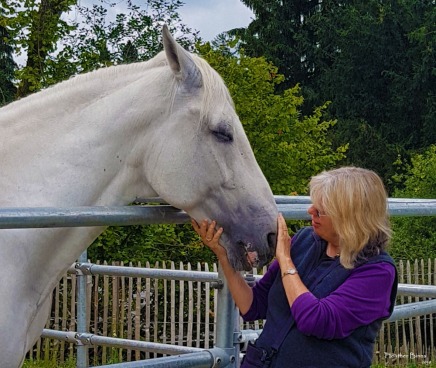 COMING UP – A MEDIEVAL EXPERIENCE – AND – ‘THE THING’!

FOR THE BEGINNING OF THIS ADVENTURE, PLEASE GO TO HORSE ADVENTURES IN EUROPE 2018